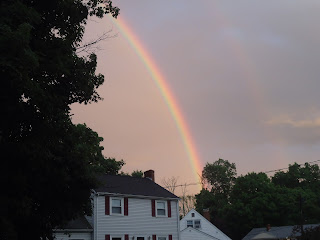 On Monday night, after an insane thunderstorm, a strangely beautiful yellow light shone in through the windows around dusk. The houses and trees across the street get the best light at that hour so I went outside to look at them. The yellow light was everywhere and the most incredible rainbow arched perfectly across the sky. This rainbow was thick. Honestly. If I had a spoon with a long enough handle I'm convinced I could have scooped some out. Would it have tasted like sherbet?

I don't know, but every single color of the spectrum was clearly delineated. The sky inside the arch was bright blue and to the right of the right arm of the rainbow it was several shades darker. There was a faint second rainbow as well, which you can kind of see in the photo above. So I grabbed the half-sleeping kids out of bed and they asked if we’d find a pot of gold. Which reminds me...

Both of my daughters found a four leaf clover this week. One through determination, the other through luck.

I stumbled across a great cartoonist. His work is here.

At night I’ve been reading the Irish writer Edna O'Brien’s memoir, Country Girl. It’s wonderful so far. I became stuck on this sentence, though: "It was the first time that I came face to face with madness and feared it and was fascinated by it." I really wanted her to add another “I” before “feared it.” But that would alter the meaning; she had probably come face to face before and not feared it.

Her recollections of a farmhand named Carnero are wonderful.

The illustrator Katherine Roy and I are working to come up with some titles for the soda bottle book. The working title had been BOTTLE OF POP. But that does not get to the fantastic journey element of the story. So we’re still thinking.

In doing some research for the ninja novel I read an incredible story about an ancient samurai. It’s at the end of a battle. This samurai sees another warrior fleeing across the river. He calls him a coward and challenges him to stay and fight. The other warrior comes back. The samurai defeats him and sees that he is barely older than a boy and resembles his son. He wants to let him go, but other samurai are coming. They will kill the boy if he does not. So the samurai kills him, granting him a more noble death. Then he looks inside the young warrior’s satchel and finds a flute. He retires his sword and never kills again.

That’s how I remember it, anyway. I could have messed up some little details, but the one I clearly remember is the flute. Who would think he’d find a flute? It’s such a gentle, peaceful, human object. And it really shows the power of detail in a story.

Sometimes when I become derailed at the computer, and find myself reading something unrelated to the task at hand, I close my eyes and remain in place for five or ten seconds. That usually works. Soon enough I refocus.

During one of these derailments I found an amazing story from 1966 about Celtics legend Bill Russell redesigning the basketball shoe and insisting it be affordable. What a change from today’s stars. He even redesigned the tread on the bottom to make it easier to stop short. The sports world needs more people like him.

And a few quotes from the week’s readings...

A biography of TS Eliot by Peter Ackroyd:

“Eliot could, as it were, pick up a poem where he had left off. He had an extraordinary gift of synthesis so that what seems to be one poetic persona, or one melodic shape, is in fact the result of compression and the selective rendering of otherwise disparate materials.”

A few years ago I met the writer Louis Auchincloss and he told me he had the same ability. He could work on a story while sitting in court, waiting for his case to be heard, then switch into lawyer mode when his turn came, and promptly pick the story back up where he left off while riding the subway back to his office. I’m not so lucky. It takes me some time to return to the world of the story if I’ve been away.

45. “Then in the summer of this year he travelled to Munich, where he completed ‘The Love Song of J. Alfred Prufrock.’ He transcribed it into his notebook and then forgot about it. Conrad Aiken said that he had been ‘heartlessly indifferent to its fate.’”

Ah, but this makes sense! He wrote something great. He was satisfied. He expelled the story and the idea and the emotion from his head and his heart and got it all down on the page. When you do that well enough, publishing is an afterthought. It’s business. It’s nothing.

And a quote from Dr. Seuss, from the book The Cat Behind the Hat:

"If I can be of influence to one child in this great vice-ridden country, my life, I feel, has not been lived in vain.”
Posted by Unknown at 2:16 PM