CORRECTION: The website for FISH is now dead. But the book lives on....

The website for FISH is live, and looking great. Some features:

1. Read a sample chapter
2. Meet the pirates
3. Keep up on reviews
4. Track events

5th graders are bright. I visited Cleveland Elementary School in Norwood, Massachusetts, two weeks ago to talk about FISH, journalism, writing in general. At one point, one of the kids posed a great question.

"If you've written something that you think is great, but your friend reads it and says it's really bad, do you listen to your friend?"

My answer was a little long and winding, but I basically said that you have to think about your friend's critique, and consider whether there might be any truth to it, but ultimately you have to listen to yourself. I added that you should never take the first person's word. You're better off waiting for a whole bunch of people to tell you that you're terrible before you start thinking about believing them.

After class, one of the kids caught me in the hall. He was nervous, maybe a little annoyed. He summarized what I'd said with regards to criticism, then pointed out a contradiction. Earlier in the class, when another kid asked me whether I was an artist, I answered that I'm not very good, then cited the fact that a very skilled illustrator once told me exactly that.

The kid recounted this story about my artistic skills, then said, "You contradicted yourself! Maybe you're not such a bad artist after all."

A budding lawyer, perhaps.
Posted by Unknown at 10:19 AM No comments:

A group of Balch Elementary School third-graders and I had a great time talking about books, writing, pirates, and FISH in the packed school library. A few miniature journalists in the class came prepared with questions. Here's a sample:

"Did you always want to be a writer?"

No, I said, I wanted to be in the NBA. They laughed.

"Did you play sports when you were younger?"

"Did you write Twilight?"

No, and you can tell by my car. 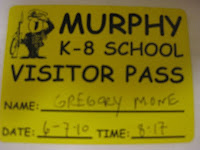 Thanks to Mrs. Gale's two 6th grade classes at the Richard J. Murphy School in Dorchester. We had a fun time talking about writing articles and books, what brain surgery looks like up close, and how all writers, even the 6th grade version, should really think of themselves as editors. We also discussed piracy and the apparently little know fact that there appears to be an editorial error in the school's sign.

The questions from the kids were really sharp. I actually thought they were eighth graders until Mrs. Gale informed me otherwise.
Posted by Unknown at 9:59 PM No comments: 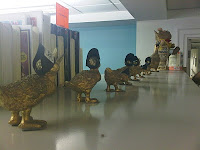 The Canton Public Library put together a fantastic FISH event this past Saturday, complete with kid-friendly sea shanties, ducks wearing pirate hats (over there on the left), goldfish, and more. I brought a few props along, including a plastic cutlass, but that quickly proved to be a bad idea, as a few of the four-and-unders in the audience went on the attack.

Ann Woodman of the Library's Junior Room did an amazing job setting everything up, and there were some hilarious comments from the kids. When I asked what they thought pirates might smell like, for example, they offered a few funny possibilities. My favorites:

"Peanuts on the floor."

The kid who threw out the last one might end up becoming a writer.
Posted by Unknown at 8:38 PM No comments:

Went to our closest bookstore, the Barnes & Noble in Walpole, and saw the book for the first time. Pretty wild to see FISH all nicely printed and bound! Our eldest was excited initially, but her focus shifted pretty quickly to a Pinkalicious picture book. Then our two-year-old grew restless, the baby woke up, and it was time to go. We did manage to buy a copy before taking the store down, though, so that was good.
Posted by Unknown at 12:03 AM No comments:

A great review from the smart, inventive Cory Doctorow went up on boingboing.net on Tuesday. Here's an excerpt:

Chock full of real historic curiosities about pirates, sly humor for grownups, excellent action scenes and general quantities of swash and buckle, Fish is a great, self-contained addition to the canon of fun pirate fiction. Perfect for young readers, even better for reading aloud at bed-time, thanks to the plentiful cliff-hangers.

FISH is out today!

Fish is officially on shelves, digitally and physically, today. Oddly, I have not seen the book yet, but I've been told it looks nice. Going to buy one with the kids tomorrow.
Posted by Unknown at 10:23 PM No comments: