Interactive Chat & Writing Under a Van 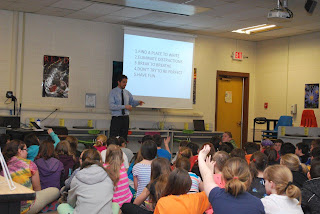 This Sunday at 6:30 EDT, in advance of the 101st anniversary of the ship's demise, I'll be hosting an online interactive chat about Titanic through a very cool new platform called shindig. It's pretty simple. When you sign in, the page turns into a beautiful library, and my bearded mug sits in a medium-sized window in the middle. I'll have some slides in another little window next to me as I talk about Titanic and how I went about writing and researching Dangerous Waters. You can ask questions via chat or texts or even raise your hand so that we can talk directly to each other.

I'll also run a trivia contest, and I'll send the winner a free signed copy of the book.

Now on to other news. I visited a great school in New Hampshire last week, and in the flow of the talks, I asked one of my favorite questions: Where do you write?

As usual, the kids were reluctant to admit to any odd spots, but once a few classmates revealed their own creative hide-outs, they were all thrusting their hands in the air. Their answers ranked right up there with some of the best. My favorites:

A young man named Sebastian detailed the merits of a small, crater-like hole in his backyard. The hole is large enough for him to sit in comfortably and not terribly clean. Yet Sebastian is so dedicated to this writing spot that he even dug out after the big snowstorms this winter.

Ivy talked about how she used to sneak into the shed at her Dad's house. The space was dark and quiet and she sat on the floor between to old rusted bikes to work on her stories.

Finally, Jason. He's a tall sixth grader, and his teacher tells me he's a great writer. Jason talked about how he used to climb under his Dad's van out in the driveway. He'd lie on the pavement and write, then scurry out as fast as he could if he heard the engine start up.