A columnist for Canada's Winnipeg Free Press, reacting to news of the official recognition of a new political Pirate Party, runs through some of the reasons rogues would be better than politicians.

This closing line is my favorite:

"Either way, you're going to get robbed, so it might as well be by someone with an eye patch and a hook."
Posted by Unknown at 9:30 AM No comments:

Buily Your own Desert Racer

The Rally Fighter from automotive start-up Local Motors is a burly, menacing vehicle no major manufacturer would ever include in its standard lineup. With its 33-inch tires, 20 inches of suspension travel and rugged inner skeleton, the street-legal desert racer is too niche for mass production. But Local Motors knows that this beast is exactly what a small subset of buyers wants. How? Those buyers designed it.

[These are the opening lines from a short feature I wrote for Popular Science on a cool new car company called Local Motors. The basic idea is that they're going to let customers assemble cars themselves. Read the rest of the article here.]
Posted by Unknown at 9:24 AM No comments:

Somali Pirates on the Move

In real world pirate news, two militant groups are fighting over the Somali pirate stronghold of Harardhere. And the pirates? Reports suggest that they've bolted. Much like the seafaring rogues of the Golden Age of Piracy, these modern pirates are not tied to any one place. In all likelihood they'll move up the coast and establish a link with another port.

More here.
Posted by Unknown at 3:30 PM No comments:

So there is a link between pirates and science after all! Last week researchers released a report detailing how people can live longer by eating less...a paper touted as a step towards the fountain of youth. I wrote about it here. Now comes the news that the new Pirates of the Caribbean movie will involve a quest for the fountain of youth. Maybe the movie will end with the pirates all deciding to eat less? That would be quite a Hollywood ending.
Posted by Unknown at 9:39 AM No comments:

Artist Jake Parker created the beautiful work for the book's cover and wrap-around jacket. He explains his process, and reveals a few of his early sketches, in this post here.
Posted by Unknown at 9:14 AM No comments:

Posted by Unknown at 8:45 AM No comments:

This is my first novel for children, but I've been telling pirate stories, and setting up kid-friendly treasure hunts, for years. Whenever we celebrate a summer birthday for one of my nieces and nephews, we usually make a treasure hunt part of the events. I'll stash clues and create ancient-looking maps that force the kids to work through puzzles and word games and eventually point them towards the final treasure.

For the first few years, my siblings and I kept it simple, leading the kids towards goodie bags and things like that. Eventually, though, we started adding more and more layers to the story. A replica treasure chest. Fake gold coins. Reports of pirate ships spotted through the telescope.

One year, I designed the map so that the final "X" led them out to a spot in the Long Island Sound. The kids were too young to swim out there, so my brother led the expedition instead. Before he swam out, we secretly loaded his pockets with old swimming medals. He swam out about 20 feet, dove, held himself to the bottom for 20 seconds, then surfaced and yelled back to the kids: "There's a sunken ship down there! I think there's treasure!" They started screaming with excitement: "Go back down! Go back down!" He did, and he held on again, making it seem as though he had to descend to great depths, and then shot out of the water, gasping, holding the old swimming medals. The kids, seeing gold, cheered and called for more.

Most of them are too old now for this sort of game - although my two young daughters are nearing prime treasure-hunting age - but designing those miniature quests really made an impression on me. It was incredible to see how pirates and treasure hunting can capture the imagination of both boys and girls. I was well aware of the fact that there are about 1,000 pirate novels, movies, and stories out there, but I figured I'd try one anyway.

The book went through many revisions over the course of five or six years, but the central idea remained the same. For me, the story has always been about this main character, Fish, a boy who loves to swim and hates to fight. I'm 34, with a lovely wife and two fantastic daughters, and I certainly don't have any experience with piracy, but this 12-year-old treasure hunter is very much me.
Posted by Unknown at 8:34 AM No comments: 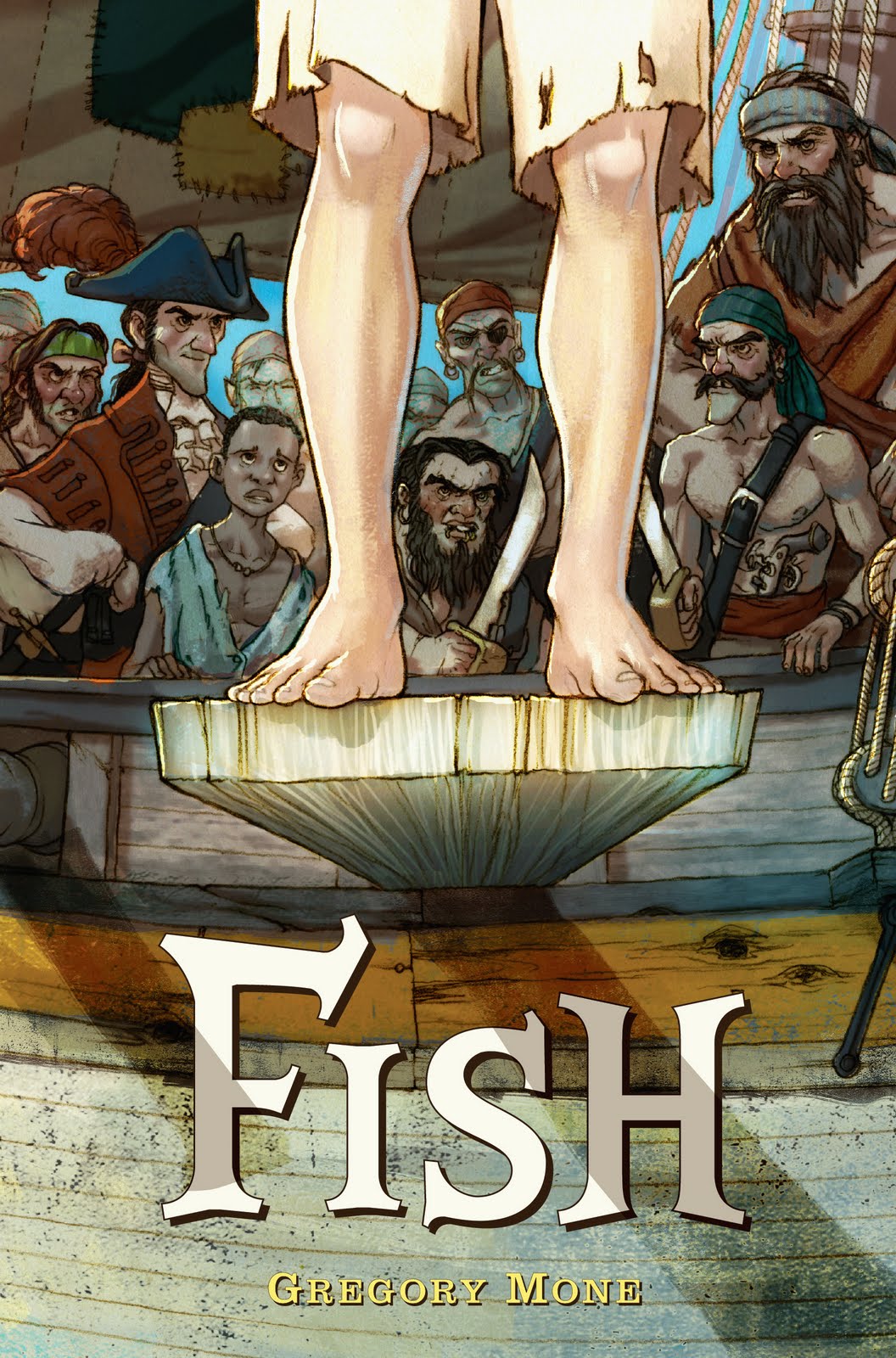 "Maurice Reidy - nicknamed "Fish" because of his incredible swimming abilities - is sent to work as a courier to help support his struggling family. Entrusted with a mysterious package of coins, Fish is waylaid by pirates who abscond with his delivery. Determined to get the coins back, he joins the wily and foul-smelling crew of rogues, embarking on an adventure that changes his life forever.

On board the pirate ship, called the Scurvy Mistress, Fish learns that the strange coins could be the key to finding a fabulous treasure and that the nasty first mate, Scab, could be plotting a mutiny. The water-loving boy has to recover the coins, thwart Scab, find the treasure, and save his family."

And here's what I think the book is about:

Adventure. I suppose that's obvious from the plot summary above. After Fish has to leave his overcrowded family farm, he ends up halfway across the world hunting a mysterious treasure. His chance of survival seems slim at first, but thanks to a few friends, his skill in the water, and a talent for the art of not-fighting, he dodges death more than once.

Swimming. Fish earns his nickname because of his love for the water, but he certainly never thought he'd use his fantastic swimming skills to escape a band of murderous pirates. He's thrilled to be out at sea, sailing across the world on the Scurvy Mistress, cruising the clear blue waters of the Caribbean. Yet he's also desperate to return to his family.

Treasure. Or treasure hunting, really. The hunting is the most important part - whether they find any treasure I'd rather not say. It's during the search that Fish proves to be a valuable new member of the pirate crew. He shows that the brain is a far more important tool than a cutlass or a gun.

Bravery. Normally we think of bravery as a hero charging forward against scores of enemies, ready to fight no matter the odds. Fish is brave because he chooses not to fight. He refuses to carry a sword, cutlass, or weapon of any kind. In a few instances this nearly kills him. A pirate ship, after all, was a very violent place, and pirates were more likely to resolve conflicts with knives than with words. Yet Fish stays true to himself. He refuses to fight no matter what.

Filth. Can you imagine being trapped on a boat for months with a few dozen people who don't bathe, wash their clothes, or brush their teeth? It would be absolutely revolting. Their foul breath, the stench coming from their fetid feet...my stomach turns just thinking of it. Yet this was the reality, so I weighed down the Scurvy Mistress with all the grime and crud and smells I could conjure. And whenever it grew too nasty, I made sure to send Fish into the water for a cleansing swim.

Of course there's more. If you really want to know what the book is about, you have to read it!
Posted by Unknown at 8:25 AM No comments: