(I'm not really here anymore. Most of the time I'm here. But I figured I'd check back in case anyone missed the memo.)

This September, Viking Children's Books will be publishing an adapted version of The Boys in the Boat, Daniel James Brown's adult nonfiction bestseller. The adult book is fantastic. Really. Read it. But I'm especially excited about this new one because I had the pleasure of working with Mr. Brown, adapting and editing the text for young readers. It's the true story of an underdog crew from the University of Washington, a group of boys who rowed their way to the gold medal at the 1936 Olympics. The characters are unforgettable, and kids are going to absolutely love the story.

I'm also working on a double top secret project with another writer. He's a celebrity, too. The good kind, though. He's smart and funny and passionate about science.

Now, as for detective fiction...here are a few lines I read recently in a Ross MacDonald book, The Ivory Grin.

"Bent over a bin of oranges with my back to the street, I heard her heels on the pavement and felt her shadow brush me, like a cold feather.”

“Large-eared and almost hairless, his head seemed naked, as if it had been plucked. His long face was dimly lit by pale worried eyes. Deep lines of sorrow dragged down from the wings of his large vulnerable nose."

Sure, I could do without the "worried" eyes, the "lines of sorrow" and the "vulnerable" nose. That's kind of cheating, in my mind, when you feed the feeling to the reader. Bellow does this all the time, too, though, so I guess it's allowed. But what if those lines aren't sorrowful? What if this guy is wrinkled because he surfs all the time and gets too much sun? Then they'd be lines of peace and harmony. Criticism aside, I love the shadow as a cold feather above, and the idea that the guy's head looks like it had been plucked is just wonderful. I laughed out loud.

This last one is just plain weird, in a good way:

“His words were soft and insinuating, breaking gently like bubbles between his pink lips. His breath was strong enough to lean on.”

The Alien in the Comic Book Store

You'd be surprised how difficult it can be to identify an alien. They don't simply trot out before you in their natural form, green, three-fingered, and slimy, with heads measuring at least as tall as their trunks. Last week, for instance, I saw one in a comic book store and he totally looked human. Average height. Sandy, messy hair. Wire-rim glasses. White. Early twenties.

So how did I know he was from another planet? He was moving around a little oddly, stopping and pretending to stare with interest at various items, but none of these behaviors really raised an alarm. Then he walked to the register with a box set DVD collection of the once popular television series Friends. That's when I knew.

Why would a fairly normal-looking young man buy the entire run of Friends? And why now, so long after its cultural moment has passed? Because he's an alien. And I can even tell you where he's from.

Last week, scientists also announced that they'd discovered the two closest habitable planets on record. A habitable planet is one that appears to have a reasonably friendly environment. So, for instance, Venus doesn't count. We'd burn if we tried to hang out there. And it wouldn't be terribly fun to breathe the air. These new planets, on the other hand, appear to be a little more human friendly. And they are roughly thirteen light years away. Which, as you know, is the distance covered by a beam of light traveling for thirteen years.

So here's what I think happened. Right around 2001, or the peak years of Friends, some of the NBC broadcast leaked out into space, racing right along at the speed of light. Thirteen years later, these broadcast waves struck the just discovered twin planets. The aliens, using inconceivably advanced technology, decoded the signals and converted them back into a view-able format. I don't know if they caught an entire episode, a whole season, or just a particularly moving or hilarious scene. My guess, though, is that the entire civilization was mesmerized. Immediately they needed to know what happened to Ross and Rachel, the former stars of the show. So they chose one brave explorer, programmed their wormhole for Earth, and tossed him inside. A few seconds or perhaps even days later I saw him, disguised as a young man, in the comic store. Disoriented, maybe. But focused. He did not wait long to grab that box set.

Star Wars has struck my house. I'm to blame, of course, but I never thought it would become this intense. We've been playing with the action figures for a while now and I'm particularly fond of Han Solo because of his versatility. If you're short a villain, for example, you could always have your existing team of bad guys, like the Joker and Storm Shadow, approach Han with an offer. Because I think we all know that Han would switch sides for the right price. He's a smuggler. Despite what George Lucas wants us all to believe, Han blasted Greedo in that Mos Eisley bar before the alien got the jump on him. Han shot first, and no amount of CGI editing will convince me otherwise.

After the toys came the movies. Episode IV first, then the prequels, because that's good parenting. Those first three are pretty funny as an adult. My favorite scene now is when Obi-Wan tries to worm his way out of his past lies to Luke. The young Skywalker confronts him in Return of the Jedi, pointing out that Obi-Wan said his father was dead. The old Jedi kind of sighs and goes into this rambling discourse, admitting that he was lying without actually owning up to it, and finishing with, "So what I told you was true...from a certain point of view."

Mind tricks aside, that scene kind of got me thinking that Jedis would make good lawyers. Imagine Obi-Wan going up against Colonel Nathan Jessup in A Few Good Men? He would have smoked him.

The one big disappointment of this whole Star Wars obsession is the books. Much of the stuff that's out there for early readers right now is TERRIBLE. The early DK Readers are really abysmal. I can't believe that Lucasfilm let them produce those things. They don't read as though they were written for first graders. They read as though they were written by first graders. And the real tragedy is that these books are popular. Immensely popular. You see them everywhere, and it would have been so easy for Lucasfilm to collaborate with real writers capable of turning out out good books.

A Swell Way to Keep From Working

This past Tuesday, on my way to a microbiology conference, I spotted a man on the train wearing a t-shirt with the word “mentor” printed in large letters across the back. His pants had fallen down below his waist. The view was unpleasant, and I felt sad for his mentee.

Some takeaways from the conference: harmful bacteria can hang around on airplane tray tables, arm rests, and window shades for days; despite early evidence to the contrary, the microscopic bugs that can cause Legionnaire’s disease survive in windshield wiper fluid; we all need to open our windows more; there’s no difference in the fungal population of men’s vs. women’s public restrooms; never schedule phone interviews about quantum computing during microbiology meetings. 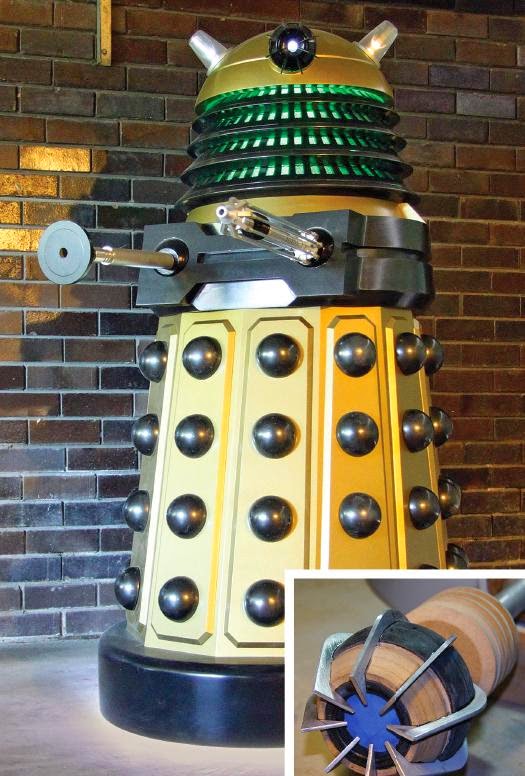 An interview with Brett Doar, who builds Rube Goldberg machines for a living.

A story about a group of young engineers who built a more practical robotic arm.

This is an older one, about a Dalek builder, that I never got around to posting. My favorite anecdote, which did not fit in the final article: At meetings, Dalek builders sometimes sit inside their creations, drive around, and mingle with each other as alien robots. They even speak in Dalek screech.

And a father and his giant Transformer costume.

In between the writing and the talking, I helped my kids put together a pretty sick ninja turtle zip line in the backyard. Then we got to show it off to a friend of mine who was visiting Boston for the night on business. He was impressed, I think. My mental or intellectual relationship with this individual is kind of strange. When I lift my car keys to a subway turnstile or try to swipe a card to enter my house, I think of him. And when I write to him about one of these incidents, and the fact that he popped into my head after it happened, he agrees that he was the right person to tell. 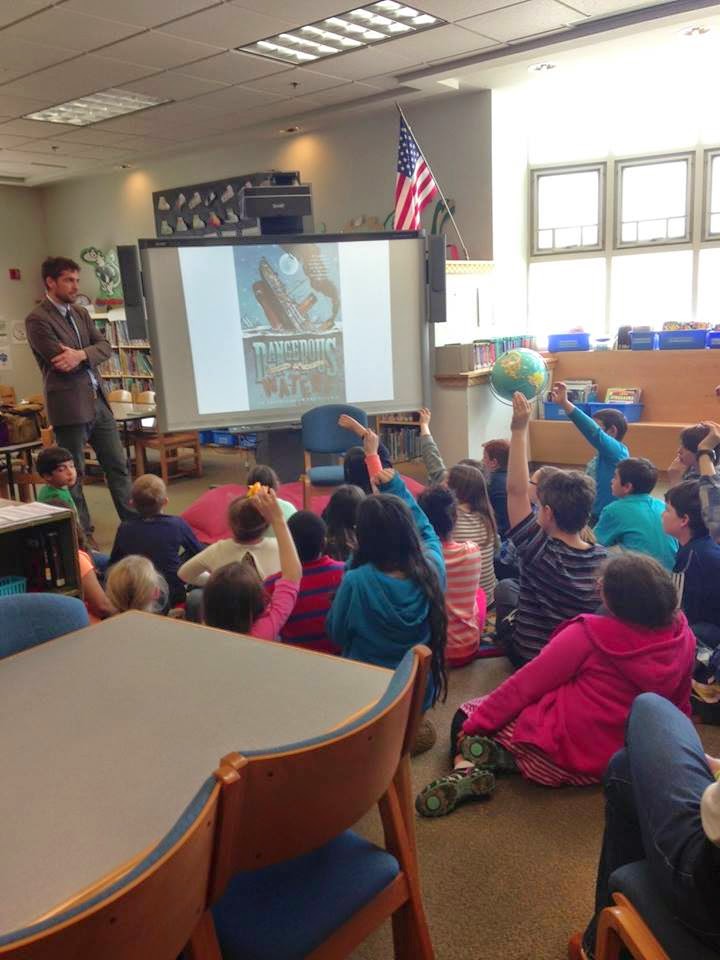 A personal record last week: Ten separate talks, plus eight revision workshops, spread between seven different schools and the lovely Massachusetts Reading Association conference. At the latter I spoke about engaging boys as readers. One of the five or six tricks or techniques I discussed: Never ever, ever, ever talk about your feelings. If the narrator discusses matters of the heart too openly and frequently, the book risks losing the boys. Or most of them, anyway.

I don't mean to imply that a great book for boys should be without heart or feeling. On the contrary. Any great book must have heart. But with boys I think it has to be subtle.

"Maniac just stood there a minute.  There was something that he felt like doing, and maybe he would have, but the lady turned and went back inside her house and shut the door.  So he walked away.”
He wanted to thank her or hug her. But he'd never admit it. Oh no. And here's another, from Rodman Philbrick's classic, Freak the Mighty:

"It’s time to go home, Gram gets nervous if I’m not back before dark.  Everything seems really great, just like Gwen says, except when I lie down on my bed it hits me, boom, and I’m crying like a baby.  And the really weird thing is, I’m happy."

The emotion comes upon him inexplicably. As a reader, you've probably already guessed that he's happy, since he's made a new friend, but he sure doesn't know, or does not want to admit it, until he's forced to confess, since he's crying and all.

Finally, I found the classic My Side of the Mountain in my father-in-law's collection. This novel follows a boy who runs away from his overcrowded NYC apartment to live in the woods of the Catskills. When the main character writes about his first night in the woods, he very reluctantly admits how he felt:

"So I sat tight, and shivered and shook - and now I am able to say - I cried a little bit."

Much later in the novel, at a happy moment, when the season changes, we get this: